You are here: Home1 / Sermon

Merciful as He is, God has granted us yet another new year, “The Year of Luke” for we can rinse out our vices entirely. We have added one more year to our lifetime and getting older by the day walking towards the end of earthly life. It is today that we shall realize the mystery of salvation and acknowledge the path to heavenly kingdom. Our destiny shall be shade by God’s mercy for we are His children.

Midst all the months within an annual year, the thirteenth month Pagumen is unique in its nature as it has only few days but not thirty days alike the others. It has only six days in the Year of John and five days in the Year of Matthew, Mark and Luke.  Accord our Ethiopian Orthodox Incarnation Church, this month is an extra month of a year and it considered as the last month in our country. However, the western countries considered it as additional days and divided it in the months of January, March, May, July, August, October and December in which each has 31 days.

The Amharic word of Pagumen comes from the term Greek word ‘Apagumene’ to mean “additional.” It is the time which we leave behind last year and enrich to the new year passing the season of summer and reach spring; so it is the resemblances of Judgment day.

The name Gethsemane stems from the Hebrew Gat-Semen which means olive press factory. The kidron at the far end of Gethsemane is called “Brook Kidron” and according to the Christian tradition it is the place of God’s last judgment.

Mercy is one of God’s qualities and the merciful one bears a His likeness. It was said about God “The Lord is merciful and gracious, slow to anger, abounding in mercy.  He will not always strive with us, nor will He keep His anger forever. He has not dealt with us according to our sins. Nor punished us according to our iniquities.  For as the heavens are high above the earth, so great is His mercy towards those who fear Him; as far as the east is from the west, so far has He removed our transgressions from us.” (Psalm 103:8-12)

Transient all the misery, sorrow and pain in life, one can taste the sweet fruit of spiritual life.  Walking upon the narrow road of it in reality, love, peace and spiritual contentment, consume the esthetic mystical fare within Christianity.  Those who fought and defeat enemy by the power of Gospel and Holy Cross just as our righteous father Abune Tekele Haimanot, have reached up to the last ladder of spirituality.

It is certain we differ in our spiritualty and diligence. But with the talent bestowed from God, we shall inherit everlasting Kingdom. Mankind can be granted spiritual virtue as witness in the stories of saints in-scripted in holy scriptures.

Seasons are repetitive flow of rain, cloud, sun and thunders within days, months and years. 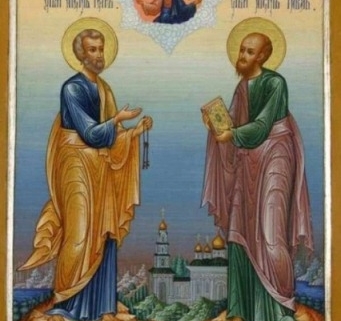 Apostles Saint Peter and Saint Paul have become the two pillars of Church who were ardent preachers of the word of God, unshakable and valiant soldiers of the truth of Lord Jesus Christ. They feared neither beatings, nor even a martyric death, which they both suffered.

Dear Children of God, Greetings to you and gratitude to Almighty God!

Children, how are you? How is school and exam? We hope you are doing great and pass all of the tests with good grades!

Dear Children! Today we are going to teach you about Holy Church.

Many times some would say in amazement: Who can carry out these principles?! Is it really possible for one to turn the other cheek to the one who slapped him? (Matthew 5:39). Is it possible that one always ought to pray and not lose heart? (Luke 18:1) to pray without ceasing? (1 Thessolians 5:17) is it possible for one to give all he has to the poor? (Matthew 19:21) We see all these questions and many similar ones answered and presented in the lives of the Saints. The whole commandments and teachings of God may seem as being theoretical. But in the lives of the Saints, we see them carrying out the Lord’s commandments in their everyday lives.

Eternity of God is the everlasting existences of His power, love, peace and happiness. He was eternal before the creation of the world; He is eternal now and will be forever! His eternity is in His Trinity; the Holy Father, the Holy Son and the Holy Spirit. It is in this mystery that we, His children can comprehend His eternity.